THE WORST CULTURAL GENOCIDE OF THE 21ST CENTURY 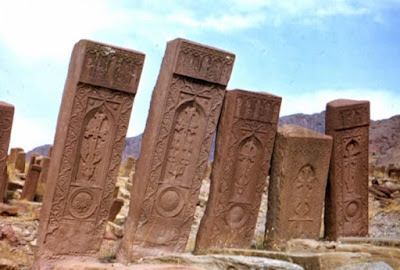 THE WORST CULTURAL GENOCIDE OF THE 21ST CENTURY

On February 2019, researchers Simon Maghakyan and Sarah Pickman published a report on the destruction of tens of thousands of medieval Armenian monuments in Azerbaijan. 89 medieval churches, 5,840 intricate cross-stones, and 22,000 tombstones are said to be destroyed by the Azerbaijani government. The original investigation in Hyperallergic art media outlet was followed by another article in The Guardian, which triggered international reaction. Regional Post spoke to Simon Maghakyan about the investigation.

The Guardian article initiated considerable media coverage of the topic, as well as reaction from general public. Where did it all start from? How did you become interested in this matter?
I have worked on this topic for over a decade now. I was a student in political science when I found out that the largest Armenian cemetery in the world, Djulfa (or Jugha in Armenian), had just been destroyed. I was shocked and I thought that the video footage was not enough for the international community to at least criticize that act of destruction.
I had heard of that cemetery from my father who visited it during Soviet times. I grew up with stories of Djulfa, and I decided to raise awareness about the crime happening there. This effort resulted in a film that I made with Sarah Pickman in 2006. I also launched a website djulfa.com.
I was working at Amnesty International as a pro bono specialist on the Caucasus, through which I got to know American Association for the Advancement of Science (AAAS). Together with them, we were able to document the destruction of Djulfa by satellite imagery. Another major achievement was an article in 2007 in History Today which was widely cited in academic circles. How did this investigation start?
I realized I was myself in a denial about the extent to which the Armenian heritage of Nakhichevan had been destroyed. I thought maybe they had left something here and there. But the more I looked into it, the more I realized that this was an unparalleled cultural genocide. Any trace of an entire civilization had been eradicated; nothing like that had happened in our lifetime.
So, on Armenian Christmas in January 2018, I was having a hard time falling asleep because I felt like this story was going to be ignored. So, I decided to conduct a major investigation that would show the outcome of this destruction and tell the story in a comprehensive manner.
You are also a part of Hay Dat Armenian lobby group. Do you think this affected the investigation and also made you vulnerable to criticism for being bias?
Anyone who reads it can see that it is written not by activists but by scholars. Sarah Pickman, a Yale University PhD candidate, and I had many peer reviewers including Thomas de Waal, who is considered the most objective and knowledgeable scholar of Armenian-Azerbaijani conflict. We also had an anonymous Azerbaijani reviewer on board to be sure that this was not going to be criticized as an activist piece. Furthermore, Netherlands-based independent Azerbaijani historian and human rights defender Arif Yunus cooperated with us.
So, the article does not have a black and white perspective; it provides as much context about the Nagorno-Karabakh conflict as possible.
What was the reaction from Azerbaijani state officials and media?
Official Azerbaijan seems to be in a state of shock: for weeks they were completely silent, and then on Twitter the Consulate General of Azerbaijan in Los Angeles started responding to many tweets from the readers of the investigation. Azerbaijan’s response on Twitter was “whataboutism” concerning the supposed vandalism against Azerbaijani monuments in Karabakh.
The Azerbaijani government also has a person named Peter Tase, who either writes an article for them, or just signs anything that they write. Supposedly, Tase is a resident in the US state of Wisconsin. He wrote a very aggressive piece about it in the Nakhichevan government official periodical. His article contained many insults (like fascist propaganda, fake news, fabrication, etc.) but it did not question the investigation itself. The only criticism was that we did not use the official toponyms, but we actually had used both historic Armenian names and current official Azerbaijani names.
Years ago, the official Baku said those were Caucasian Albanian monuments. But now, when all the Christian heritage is eradicated, they just say those monuments never existed.
Was there any reaction on non-official level?
On Azerbaijani side, there were many private reactions from very significant individuals, but I don’t want to endanger their well-being by giving you details.
These individuals - and I am sure many more – were devastated by the destruction in Nakhichevan, and the investigation gave them the same sense of satisfaction that the truth about the destruction was finally told in a comprehensive and contextualized method.
Khachkars are protected by UNESCO. What feedback did the organization give to the report?
They had known about the destruction of Djulfa long before, perhaps not to this extent. And I had told them about the investigation ahead of time, they knew it was coming up, and when it was published I send it to them and got a short note of thanking for having shared the information. I have sent them a list of recommendations which I think UNESCO should do, including the canceling of upcoming World Heritage Committee session which is to be held in Baku in early July. At the very least, they have acknowledged it. However, I don’t have much hope regarding UNESCO, I really don’t think they are going to do much unless the Armenian government brings this up at every international gathering on culture heritage. Do you think the preservation of Armenian cultural heritage should have any importance for Azerbaijan?
Our article has finally taken out this topic from a “he said/she said” dialogue. Until now, Azerbaijan has been able to, sort of, portrait reports of this destruction as just tit for tat. Now we proved that this is an international crime that has been committed by the government against the very monuments they were supposed to protect and in an area that was never a war zone. Armenians are not the only ones that have been impacted by this: heritage belongs to everyone, not to one ethnic group or culture. We should have deep knowledge and objective information about past and present, and that information should be transferred to others: it is good for democracy, it is good for tourism.
Besides, I think Armenians have always felt that their monuments are targeted by Azerbaijan, and unfortunately, Azerbaijan has confirmed the worst fears that Armenians have had. And this action has made the long-term peace much harder. But in the investigation we made sure not to blame the entire Azerbaijan or Azerbaijani people for this destruction. We want to highlight that there are two Azerbaijans: the Azerbaijan of Aliyev family and the Azerbaijan of Akram Aylisli, who loved, adored Armenian monuments probably as much as any Armenian. By telling this story of devastation people like Akram Aylisli can find a common pain from the destruction of the cultural heritage. Instead of using this to boost our own anger we should try to understand that this is a crime that was committed against everyone, including Azerbaijani people.

Simon Maghakyan
Denwer-based educator, researcher and activist. Lecturer of International relations at the  University of Colorado.

Sarah Pickman
Ph.D. candidate in History at Yale University. She has been published in a number of academic periodicals, including Cosmologics and Archaeology magazines.