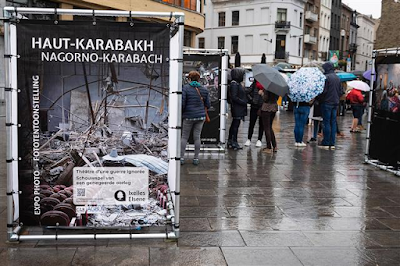 OPEN AIR PHOTO EXHIBITION ON ARTSAKH WAR
OPENS IN BRUSSELS
© Threesome Design Studio – BrusselsFollowing a citizen's request, the Commune of Ixelles, in Brussels, took the initiative of organizing an awareness raising campaign to inform its inhabitants about the Nagorno Karabakh (Artsakh) conflict, hardly covered in the Belgian media, and about its impact on the Armenian population of the region.
Centered around an open air photo exhibition displaying the work of two journalists who traveled to Artsakh during the 2020 war, the campaign is entitled: “Nagorno-Karabakh: Scene of a Disregarded War”. AGBU Europe is pleased to be the partner of the municipality for this initiative, alongside the Armenian community of Belgium (CAB).
Despite the rainy and windy weather, the opening of the exhibition in the heart of Ixelles on October 1st gathered around 200 attendees, including several public figures such as Mrs. Anna Aghadjanian, Ambassador and Head of Mission of the Republic of Armenia to the European Union, Belgian MP George Dallemagne and former MP André Dubus and Julie De Groote.
In his opening speech, the mayor of Ixelles Christos Doulkeridis stretched the importance of the campaign aiming at raising awareness about “a war, certainly a bit far from us, but which is a matter of concern to all of us on a number of counts.” He added that “given the link that exists between Ixelles and the Armenian community, since it is here in Ixelles that the monument dedicated to the commemoration of the Armenian genocide is located, it seemed fundamental to us that we take the responsibility to show these photos, to exhibit them in the open air, in public, despite the criticisms that we may have heard around us.” Convinced that no one should remain indifferent, the mayor described the initiative of the Commune as “a way to provoke interest in what is happening in the region”.
Indeed, since the cease fire signed on November 10 last year, tensions in the region remain high, especially in the new border zones, where the Azerbadjani army has made several incursions in the territory of the Republic of Armenia, threatening the security of the Armenian population of these border villages.
One of the two photographers of the exhibition, Roberto Travan, traveled from Torino, Italy, to attend the opening in Brussels. In his conversation with on-site viewers, he expressed just how deeply he has been affected by his experience in Artsakh and how grateful he is to the local population who did their best to accommodate his needs during his mission as a reporter. He explained: “I’ve covered different war zones in my career as a photo journalist. I was in Ukraine, in Afghanistan, in Central African Republic but my work in Nagorno Karabakh was by far the hardest experience. The constant shelling in Stepanakert, day and night, on civilian targets, was really what made it so different from the other wars.”
Belgian photographer Olivier Papegnies also traveled to Artsakh during the war, on a trip with Belgian MP George Dallemagne, and immortalized with his camera the devastating impact of the war on civilians. According to Dallemagne, Papegnies’s photographs “speak from the heart of the distress of a population so often bruised. A tragedy that is not over."
Lisa Abadjian, a citizen of Ixelles who called on the local authorities to go beyond statements during the war in Artsakh in 2020, is very grateful to the Commune for their concrete action. As she noted, “fortunately, there are humanist and committed politicians like the Mayor of Ixelles. We hope that the exhibition will travel through different communes of Brussels, different cities in Belgium and why not in Europe.”
The current exhibition on view since September 27 will last until November 10, the exact period of the 44-day brutal war that ravaged Nagorno-Karabakh in 2020.
To learn more about the exhibition, please visit:
https://www.facebook.com/events/594291448613873/
© Threesome Design Studio – Brussels From left: organizer Céline Gulekjian of AGBU Europe, photographer Roberto Travan, Mayor Christos Doulkeridis, Deputy Mayor Bea Diallo and organizers Lisa Abadjian of the Armenian community of Belgium and Nicolas Tavitian, President of the Comité des Arméniens de Belgique.© Threesome Design Studio – Brussels Viewer at the open air exhibition in the Flagey area in Brussels. AGBU Europe (www.agbueurope.org) coordinates and develops the pan-European activities of the Armenian General Benevolent Union. Established in 1906, AGBU (www.agbu.org) is the world’s largest non-profit organization devoted to upholding the Armenian heritage through educational, cultural and humanitarian programs. Each year, AGBU is committed to making a difference in the lives of 500,000 people across Armenia, Artsakh and the Armenian diaspora.
Posted by @Նիդերլանդական Օրագիր at 00:49